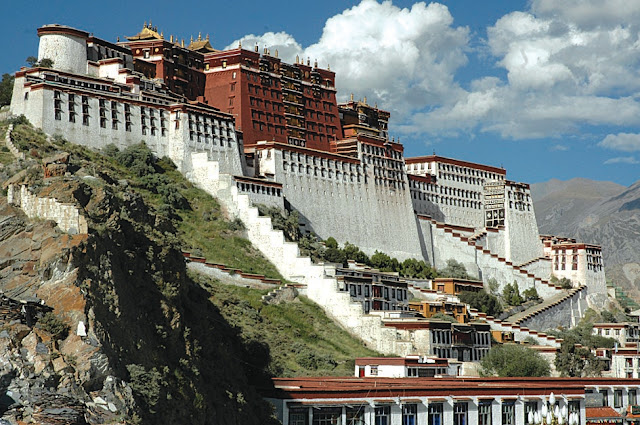 Tibet, the land of ancient Buddhist culture, fabulous landscapes, artistic monasteries, exotic cities, hidden valleys, and centuries-old caravan trails, Tibet allows experiencing the pristine culture. Tibet is renowned as the Roof of the World, it is the destination for the ultimate adventure junkies. If you are willing to travel Tibet. Nepal Wonders Treks is a perfect spot to grab a perfect deal to explore pristine land.

The place to See in Tibet
1. Lhasa
Lhasa will overwhelm you with its extraordinary sights. And it's not only the altitude(3,650 m) that will offer a fabulous view. The magnificent Potala Palace, a former seat of the Dalai Lamas, presides over the city. As per the mythology, this entire palace was built 1645 located at the top of a hill, the palace contains a thousand rooms, 10,000 shrines, and 200,000 religious statues. The old city revolves around the Jokhang Temple and the quaint Bhakor market that surrounds it. It is said that this temple was built in the seventh century, is one of the holiest Buddhist shrines in Tibet. Its mural paintings finely worked golden roofs and other artworks are something to see.

2. Norbulingka
Norbulingka, which means "the jeweled garden" consists of 360,000 sqm of wooded greenery and three palaces once used by the Dalai Lamas as a summer retreat. The Drepung Monastery lies about 10 km from the city, Built-in 1416 by a disciple of Tsong Khapa, it is the largest in Tibet. Its numerous Buddhist statues, ancient scriptures, scroll paintings, and other cultural relics will keep you fascinated. The Sera Monastery about 5 km north of Lhasa, is another important center of Buddhist learning. Built in 1419, its most remarkable image is a 9-meter image of Maitreya.

3. Shigatse
An excellent excursion from Lhasa is a circuit that takes in the town of Shigatse, Gyantse, and Tsetang. Fine highways and stunning scenery on the way make this a superb trip. It also offers a comprehensive experience of Tibet in a neat itinerary.Shigatse located at an altitude of 3,900 m. It offers fascinating views of farmers plowing their fields with yaks, sheep grazing on the vast plains, awesome sand dunes and rocky hills in the distance are the scenic rewards of this journey.

4.Gyantse
Gyantse's is renowned for Kumbum Stupa which is 32 m high and contains 77 rooms and 100,00 images of the Buddha. A prince of Gyantse had it built in 1427 by craftsmen from the Kathmandu Valley. It is the finest example of 15th-century. The road from Gyantse to Lhasa (260 km) takes you over three mountain passes: Simala (4,380 m high), Karola (5,045m) and Ghampala (4,794 m). The scenery and the adventure of travelling on the classic caravan route makes this excursion an unforgettable journey.

5.Tsetang
Tsetang is popular for the cradle of Tibetan civilization. The ancient town offers a number of side trips that illustrate Tibet's early history. The Valley of the Kings (ancient capital of the Yarlung kings who established the Tibetan nation), the Yumbu Lagnag Palace which was built for the first Yarlung King), and the Tandruk Monastery one of the three royal Buddhist temples) are some of the major sights.

1.Overland
The highway from Kathmandu to Lhasa crosses the Himalayan range north of Kathmandu and then turns north to follow the old caravan route over the Tibetan plateau.

Altitude sickness
Altitude sickness is the effect of the thin air at great heights. Travellers to Tibet may suffer some discomfort like breathlessness and headaches before becoming acclimatized. Many Hotels keep bottled oxygen for emergencies.

Accomodation
There are tourist standard hotels with modern facilities as well as no-frills basic accomodation.

Season
The popular time of the year to visit Tibet is May through October. Light-weight clothes are recommended during this season.  Warm clothing is required from November to April.